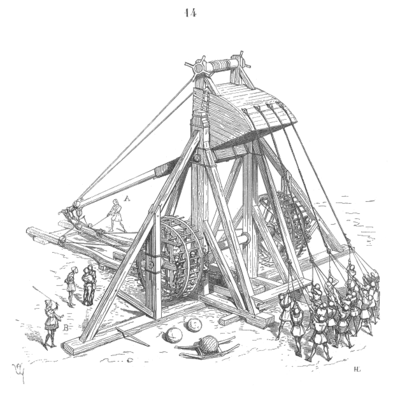 Catapult type weapons have existed in so many different forms that Catapult can be regarded as a category rather than a particular Siege Weapon. The Chinese, during the Tang Dynasty (618AD–907AD) developed a Carroballista, which was a large Crossbow (i.e. Ballista) mounted on a wheeled cart.

The word Catapult comes from the two Greek words "kata" (downward or against) and "pultos" (a small circular battle shield). Katapultos was then taken to mean "shield piercer". The Greek Catapult (Katapeltikon) was developed in the 4th century BC. At first they were used to launch arrows and darts but in the reign of Alexander the Great, stone-throwing Catapults were introduced.

The Romans adopted these weapons during the Punic Wars (264BC to 146BC) and further developed them, before introducing the new arrow-firing Ballista and stone-throwing Onager.

There were two broad types of artillery in the Ancient World. Tension devices derived their power from bending a bow-shaped structure and Torsion artillery relied on twisting loops of rope, horse hair or sinew. The Romans referred to Torsion Siege Engines as Tormentum and often used this term to describe Siege Weapons of various kinds.