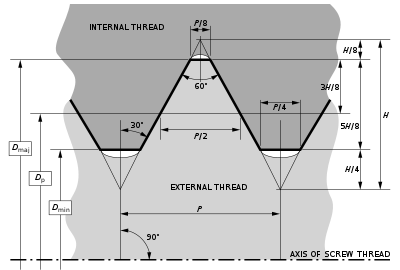 The most common way of cutting Screwthreads by hand is by using Taps and Dies.

Taps are held in a Tap Wrench to cut a thread inside a drilled hole. Thread sizes are given as the diameter of the bar on which the external thread would be cut (i.e. the bolt diameter). It follows that the holes in which matching internal threads are cut must be less than the nominal thread sizes. They are known generally as the Tapping Sizes and are given in reference tables.

Taps are available in sets of three: Taper, 2nd Taper and Bottoming or Plug Taps (these have no taper at all). The Taper Tap is used first to get the thread started and in thin materials may be the only one needed. Bottoming or Plug Taps are used to continue threads in thicker materials or to finish a thread to the bottom of a blind hole (i.e. a hole that does not go right through the material).

The most common Dies are Circular Split Dies held in a Die Stock which has three adjusting screws: one screwed into the split to open the Die to its largest size, and two others either side, which can close up the Die once the central screw is slackened. The Die itself is also tapered on one side and, in this way, a single Circular Split Die can be opened up to start a thread then adjusted down to cut a thread such that it runs smoothly inside a nut or threaded hole and without too much slack. The end of the bar which is to receive the thread should always be slightly chamfered to make starting easier and if this is done accurately, on a lathe for example, the chamfer will also help to ensure the thread starts square to the bar to avoid drunken threads.

When cutting a screwthread with either a Tap or a Die it is commonly accepted practice to advance one turn forwards then half a turn in reverse to break off the chip being cut. It is more important however, to feel the cutting action and gain a sense of when to cut and when to go backwards to cut off the chip - this may vary with the size of thread being cut and choice of material. Gaining such a feel for the cutting action is most important when using Taps to cut a thread inside a blind hole. The danger is that if too much force is applied as the Bottoming Tap reaches the bottom of the hole, it may break. Note also that chips of metal will fall to the bottom of the hole during the cutting operation and these need frequently to be cleared out.

All Tap Wrenches can also be used with Reamers, Screw Extractors and other tools with a square shank.