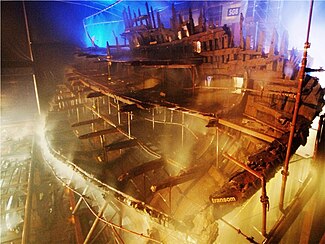 Timber decay is mainly the result of its being attacked by living organisms such as Fungi and Insects. which require moisture and air to thrive. Even though the timber structure of the Mary Rose was submerged in water for more than 400 years, some 40% has survived because it became covered in mud and silt, which excluded air and prevented organisms from feeding on the wooden hull. It is timber used outside in the open air which is most at risk especially if exposed to excessive moisture. Preservatives work by coating the timber with substances that repel water, deter insects and/or will not support living organisms.

Well Seasoned and timber for furniture and interior fittings should be adequately protected by the normal oil, wax, varnish and paint finishes used, provided it remains in a warm dry environment.

Safety Point! Timber treated with Preservatives should not be burned on open fires or in log burners, since this may release harmful toxins into the atmosphere. Industrial Incinerators work at much higher temperatures such that hazardous compounds are broken down to harmless common elements like carbon, oxygen and hydrogen.

Some timbers are more resistant to decay, or are more Durable, than others. They include Cedar, which is a Softwood and several Hardwoods such as: Teak, Oak and Iroko.

Wooden ship hulls were very susceptible to attack by marine organisms and growths, especially in warmer oceans. This not only caused severe structural damage eventually but even a covering of seaweeds and barnacles would slow down the ship's progress considerably. Various compounds of tar and pitch were tried, and later a sacrificial outer planking of thinner timber which could be replaced in dry dock, but by the mid-18th Century the Royal Navy adopted Copper Sheathing to preserve ships' hulls and later to reduce cost, a copper Alloy called Muntz Metal - a practice later followed on merchant vessels (e.g. the Cutty Sark) but made obsolete with the construction of iron hulls and Anti-fouling Paint

Note: Copper Sheathing came to indicate a well maintained ship, which led to Lloyd's of London charging lower insurance and even today the term ‘copper-bottomed ’ continues to be used to describe a venture, plan or investment that is safe and is certain to be successful.

Creosote is made from distilling Coal Tar. Traditionally, it was used for most external applications (e.g. sheds and fences - and especially wooden railway sleepers) but it can cause irritation and has been found to be a health hazard. It was withdrawn from sale to the general public in 2003 but is still available to licensed professional operators. Less harmful substitutes (e.g. Creocote) are now made from petroleum distillates with synthetically manufactured substitutes and are more commonly used. Both these Preservatives are suitable for rough sawn timber and easily applied by liberal application using a brush or by dipping fence posts, for example, and leaving them to soak it in for 20-30mins. They are water repellent and have a strong odour which discourages insects.

Decking Oil is made from Linseed Oil and White Spirit (aka Turpentine Substitute) together with Oil Driers. As the name implies, Decking Oil is used on patio decking and is applied liberally with a brush such that it soaks well into the timbers. Decking Oil reduces the risk of timber cracking, splitting and warping and is available both clear and coloured .

Decking Stains tend to be varnish like products that coat the surface of the deck although some will also penetrate the top layers of wood. Often available in a wide range of wood shades, decking stains effectively seal the timber from the elements. Some contain anti-slip micro-beads to make decking tread safer.

Water based preservatives are popular, available in colours, water repellent, deter insect attack and perhaps the better choice for timber that has a natural resistance to rotting, such as Cedar. They have least impact on the environment but will not effectively prevent rot in wood constantly exposed to water, such as fence post bottoms and earth retaining woodwork (e.g. raised flower bed edgings, compost containers). They can be applied with a brush but are also sprayable, which makes them very convenient for treating large areas such as sheds and fence panelling.

The surface of timber can be Charred by playing a Gas Torch flame over it to create a blackened surface which is then wire brushed to remove loose material. The resulting carbon-rich surface is resistant to fire, rot, insects and the UV effects from the sun and can also be further treated with additional preservative, oil or varnish. It is a technique which can be useful for exterior cladding and for the bottom of fence posts.

Note: Charring can be used when setting fence posts into concrete. Their durability is much improved if they pass right through the concrete such that water can drain out of the bottom. Also the top surface should be angled and above ground level to ensure water does not collect here.

Charring can also be used decoratively. It brings out the richness of grain structure and varying the intensity of the burning can produce different finishes. This feature is exploited by the Japanese process of Yakisugi. Timbers such as Cedar, Pine and Oak are charred, wire brushed, washed and then oiled to create a blackened durable finish, sometimes with contrasting grain.