Difference between revisions of "Weaving" 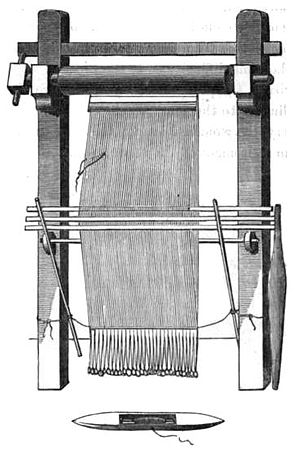 Weaving is one of the oldest crafts and can be traced back to Neolithic times – approximately 12,000 years ago. The general principle of weaving was used to create fences or hurdles (aka Wattles), shelters and baskets from branches and twig. Eventually strips of plant fibres, (e.g. from Flax which is used to produce Linen) and wool were woven together to create textiles for clothing.

The Vikings used this technique to produce the large square sails which powered their ships - each oarsman or warrior would have had at least one woman in his household, working for nearly a whole year, to weave him the necessary textiles for woollen clothes and special rugs to keep out the cold, together with his part of the sail, before he could set out.

Most Viking households would have a Loom on which wider pieces of cloth could be produced. In addition, basic weaving techniques including: Finger Weaving; Tablet Weaving (see also YouTube demonstrations; and Peg Looms; together with Nålbinding and perhaps Spool Knitting could be used for narrower strips, cords and braids.