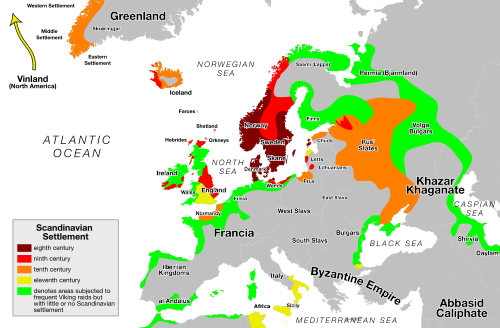 Vikings were Norsemen, meaning ‘people from the North’, a Germanic tribe originating in Asia who conquered and occupied the Scandinavian countries we now know as Norway, Sweden and Denmark.

Vikings were great travellers and sailed all over Europe and the Atlantic Ocean in their Longships. These had a very shallow Draft which meant they could be rowed up shallow rivers as well as across the sea, powered by oars and their large square woollen sail. They had travelled as far as Canada some 500 years before Christopher Columbus 'discovered' America.

Initially they raided and pillaged areas around them and returned home with their 'spoils' but later they settled and built colonies in the lands they conquered - attacking York (aka Jorvik) for example, on November 1st 866. By the 9th century they ruled over most of northern and eastern England whilst the south and west was under the control of the Saxon kIng Alfred the Great. The treaties, which established peace between the two kingdoms, later became known as Danelaw.

At the beginning of the 10th century the French king, Charles III, gave them land in the hope they would stop attacking France. This we now know as Normandy and is from where the Normans, who were descendants of the Vikings, invaded England in 1066.

But the Vikings were also farmers, fishermen, trappers and traders. Viking craftsmen made beautiful objects out of wood, metal and bone; Viking women were skilful weavers, producing fine, warm textiles.

Viking history provides an excellent context for Design and Technology activities including: Longhouses, Longships, Jewellery, Board Games and Weaving.

Pages in category ‘The Vikings’

The following 8 pages are in this category, out of 8 total.

Media in category ‘The Vikings’

The following 29 files are in this category, out of 29 total.