If an ‘L’-shaped lever is pivoted at its centre, the direction of the input movement or force would be turned through 90° at the output. This linkage is known as a Bell Crank (so called because it was used in Victorian times in linkages used to operate doorbells and servants' bells). They can be used to change the angle of motion through any angle but 90° is common. 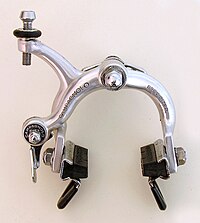 The Brake Caliper on a bicycle is a common device which uses the principle of this mechanism. Here the force from the handlebar lever is turned through 90° to squeeze the brake block against the wheel rim.