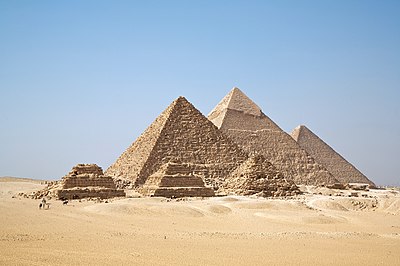 Around 4500 years ago (i.e. 2500 BC) the ancient Egyptians started building Pyramids as tombs for their Pharaohs without the aid of the kind of machinery we take for granted today.

They are solid and are made from massive blocks of sandstone, limestone or granite each weighing around 2½ tonnes. It is thought that the blocks were cut from local quarries using wedges and other simple hand tools made from Copper or Bronze. After cutting, they were loaded into barges and floated along the Nile until they were close to the building site. They were then dragged on Sleds to their final position.

The Sleds were dragged over planks by teams of workers. Water (or milk) could have been poured under the Sled runners to reduce friction. The workers were mainly farmers who thought it an honour to do this work for their pharaoh (and workers who died seemed to have been given a proper burial) - or perhaps it was a form of tax. Most of the work took place between July and October when the Nile flooded their land so they would have been available for such work.

It has been calculated that each pyramid took 20 years to build and, over the next 1000 years, many of these huge structures were created. Early pyramids were built as a series of steps which were faced with polished limestone to create a smooth white surface and the tops even given a metalic covering of Electrum (a naturally occuring alloy of gold and silver) such that they would reflect the sun's rays as it rises behind the pyramid. Exactly how they were built remains a mystery but theories include:

Activity: How would you raise the heavy stones up the Pyramids?