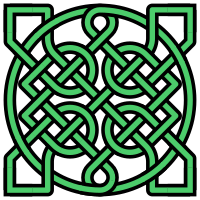 Celts is a modern English word used to describe the many tribes occupying central Europe during the Iron Age (i.e. 800BC until the arrival of The Romans AD43). The two main tribes who settled in Britain were the Gaels, who settled in Scotland, Isle of Man and Ireland, and the Britons, who lived mainly in Wales and Cornwall.

The Celtic tribes believed in Gods associated with nature and their priests were called Druids. They made sacrifices to their 400 or more Gods by throwing offerings into the lakes and rivers where they believed the Gods lived. They believed in life after death and so were often buried with possessions they would need in the afterlife (e.g. helmet, sword and shield).

A most famous Celt was Boudicca, a queen of the British Iceni tribe, who is often pictured on her Chariot inspiring the large army she had gathered together. She led rebellions against the invading Roman armies until she was defeated at what later became known as the Battle of Watling Street. 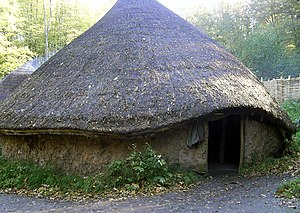 The Celts did not build towns and cities but most lived in scattered farming communities. Some communities were built as a collection of Roundhouses on hill tops as Hill-Forts surrounded by ditches and ramparts for protection. Roundhouses had thatched roofs and walls made of Wattle and Daub or stone dependent on the availability of timber locally.

Celtic Knots were a central feature of Celtic art in the late Roman Empire before the Christian influence on the Celts, which began around 450 AD. The knot patterns were adapted and used to decorate Christian monuments and manuscripts.

Soap is believed to have been invented originally by The Babylonians but the work Soap is derived from the Celtic word Saipo. The Celts were familiar with its production and use. Making soap requires mixing animal fat, or Tallow, with Lye, a strong caustic solution created by soaking the ashes from a hardwood log fire with rainwater.

A topic involving Celtic Britain provides many opportunities for Design and Technology activities, including making models and might include: