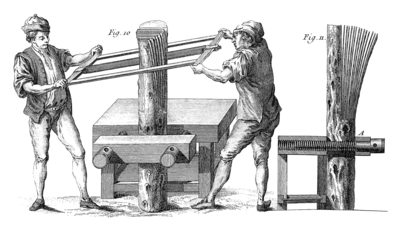 Framesaws are characterised by having thin metal blades held in tension inside a frame. Examples include: Fretsaw, Piercing Saw, Hacksaw, Coping Saw and Bowsaw - although large and sometimes powered version of Framesaws (and named as such) can be used to convert timber.

Fretsaws and Piercing Saws tend to be used by pulling down vertically against a V Board and so their blades face towards the handle. Coping Saws and Bowsaws by contrast are more commonly used with work held in a vice in which case their blades face forwards. In each case this avoids the problem of waste from the cut obscuring the line to be followed.

Note: The work of Coping Saws and Fretsaws is now frequently done by a Scroll Saw and Bowsaws have largely been replaced by Bandsaw and Jigsaw.