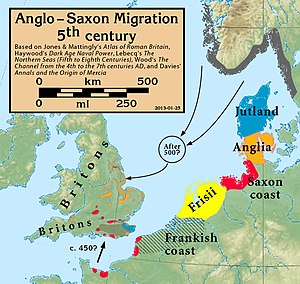 Anglo-Saxon is the name later given to the inhabitants of England following the return of The Romans back to Rome in AD410. Groups of invaders from northern Germany, Denmark and The Netherlands rowed across the North Sea to Britain. Over time, they dominated then mingled with the local Britons and settled until, by about 600, England was divided into small Anglo-Saxon kingdoms each ruled by a king. Their arrival marked the beginning of England as a nation and the word 'England' is derived from 'Angle-land'.

The Anglo-Saxons chose not to continue in the way of Roman Britain and instead replaced the Roman stone buildings with their own wooden ones. They brought with them their own religion and worshipped Gods such as Woden, whom Wednesday is named after, but the arrival of Saint Augustine in AD597 converted most of the country to Christianity.

After some 400 years of Anglo-Saxon rule, England came under attack by invading Vikings who occupied much of northern and eastern England. Anglo-Saxons continued to be ruled by King Alfred, Saxon king of Wessex, the only Saxon kingdom to survive the Viking invasions, so for some time England was divided in two. In AD954, the Vikings were defeated by the Wessex army in York and England was re-united under King Edred.

Viking incursions continued and in September 1066 King Harold, the last Anglo-Saxon king of England, marched north to defeat invading Norwegians led by Harald Hardrada at the Battle of Stamford Bridge. The Anglo-Saxon age in Britain ended three weeks later in October 1066 when King Harold with his now exhausted army, was killed resisting the Norman invasion at the Battle of Hastings. On Christmas Day 1066 William the Conqueror from Normandy was crowned King of England and replaced all the Anglo-Saxon lords with Normans.

The following 2 pages are in this category, out of 2 total.