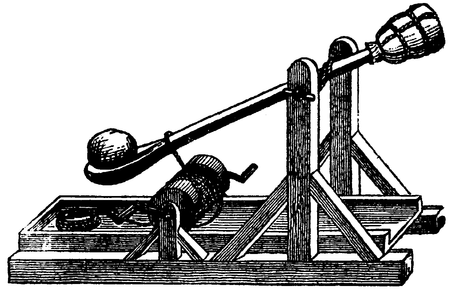 The term Mangonel is derived from a word the Greeks used for any engine-type military weapon. It means ‘engine of war’. Onager and Mangonel can be regarded as essentially the same machines. Indeed there seems to be some interchangeability between the names of Siege Engines generally.

It is possible that the Mangonel referred to in the Middle Ages differed from the Roman Onager and was more like a small Trebuchet with a fixed counter-weight which was pulled down by several men. This way, with trained workers, the leader of the team could adjust the strength applied to the Mangonel.

An alternative suggestion is that a Mangonel, instead of a short Sling, had a fixed bowl at the end of arm which could be loaded with stones, fire pots or rotting corpses etc.

A reasonably quick and easy way to make a model Mangonel is based on a Rolling Chassis made by Box Modelling.

An alternative construction is to start with a rectangle of thick card reinforced with lengths of Stripwood.

Safety Point! Use table tennis balls, squash balls or wooden beads as ammunition for example - NEVER use anything sharp or heavy