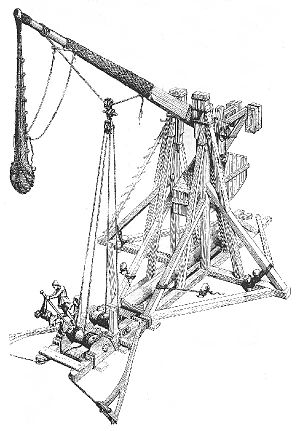 Medieval weaponry included a large number of Catapults such as the Mangonel, Onager, the Ballista, and the Trebuchet which was brought over to Europe in the 4th century AD.

The Trebuchet was a large machine, about 30m high consisting of a long beam attached by an axle suspended high above the ground by a strong frame and base.

The long beam was Winched down and the Sling loaded with a large stone typically, but could be almost anything. When released, the Counterweight would cause the arm quickly to swing upwards and the long Sling also to rotate and release the load at the end of the movement. This combined motion would impart considerable speed on to the Sling and an average load of 50-100kg could be hurled 300m or more - (see the DT Online article on Velocity Ratio)

Two types of Trebuchet were used. Counterweight Trebuchets had either a weight fixed to the short arm of the beam or a Traction Trebuchet had weights loaded into a basket hanging from it and, in addition, troops would pull it down with ropes to assist and/or control the release.

They were used mainly to throw stones, fire pots and even rotting corpses over the fortifications to cause destruction and create chaos inside the walls.

Model Trebuchet can be made using Stripwood Technology techniques with card and 8mm x 8mm square timber. Start by making a reinforced card base for a Rolling Chassis, 210mm long and 100mm wide :

Safety Point! Use table tennis balls, squash balls or wooden beads as ammunition for example - NEVER use anything sharp or heavy

Model Trebuchets compared with an Onager