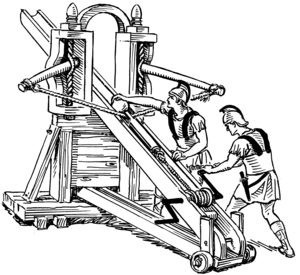 The Ballista (plural Ballistae) were similar to giant Crossbows but instead of being powered by Tension when drawing back a bow, the Romans developed it into a more powerful Torsion device by pulling back on levers set into twisted skeins of rope, hair, or sinew.

The design was based on a huge dart or javelin throwing machine but could easily be modified to shoot rocks for example. The Ballista would loose projectiles with great force along a flat trajectory. The Romans developed them to have range of as much as 460m but their effective combat range was much shorter. Different size Ballistae were built, some smaller versions were called a Scorpions (they would ‘sting’ the enemy) and others were capable of being mounted on the top of a Siege Tower

The Ballista was highly accurate and generally believed they would have been used mainly as anti-personnel weapons, or to destroy light structures, whereas less accurate weapons such as an Onager, could hit reinforced wood or heavy masonry with more force by ejecting heavier munitions.

Model Ballistae can be made using Stripwood Technology techniques with card and 8mm x 8mm square timber. Start by making a reinforced card base for a Rolling Chassis, 210mm long and 100mm wide :

Ballistae could throw large javelin type ammunition or a heavy stone (i.e. a Stone Bow). Early versions were powered by Tension (i.e. as a Long Bow). This was replaced by Torsion power provided by twisted rope or sinew.

Safety Point! Make Javelins from Art Straws or Dowel blunted with a wooden bead on its end for example - NEVER use anything sharp or heavy

Model Ballistae can be developed further by adding a Winch with a Ratchet and Pawl to pull back the bow.