Difference between revisions of "Timber Conversion" 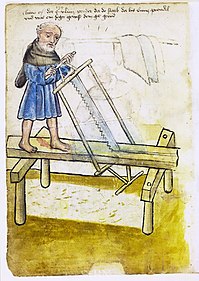 Soon after being cut down, or Felled, trees should be cut into useable sections - a process known as Conversion. A growing tree contains a high percentage of moisture and is most easily cut when in this green state. But the large amount of moisture also makes the tree heavy and so overhead cable-ways, railways and rivers are used to transport the logs to the timber yards - in addition to trucks where roads are possible.

Saws are known to have existed in Ancient Egypt from illustrations at the tomb of Nebamun and Ipuki in Thebes for example. In addition, there are many engravings and other illustrations showing the Medieval use of large two-handed Frame Saws over a Saw Pit - and the later development of powered sawmills.

Early saws were not as efficient as modern versions, and mostly powered only by hand, so it is probable that many logs were Cleaved since this is relatively easily done whilst logs are in their green state.

A Roman engineer called Vitruvious, a contemporary of Julius Caesar, refers to the lowest part of the tree which is free of knots, and after throwing away the Sapwood being, ‘‘split up into four pieces and prepared for joiner's work, and so is called 'clearstock'.’’ - [Ref: De Architectura, Book II, 9.7, 4 from Vitruvius on Trees]. This provides an early description of Timber Conversion.

A few hundred years later, around 3AD the Romans developed a Water-powered Sawmill but even after, these were not common across Europe until the 18th Century.

A large industrial size Gang Saw can saw a whole log into planks with one pass. These are a development of the early Frame Saws with multiple blades, set a fixed width apart, that are powered to reciprocate up and down.

Gang Saws are still used and during the mid-19th Century steam powered Circular Saws were introduced leading on to the the Double Circular Saw - with one blade above the other to enable larger diameter logs to be cut.

Many modern Sawmills now use an electrically powered horizontal Bandsaws. These can cope with wider logs and make less waste than Circular Saws because of their smaller Kerf.

Sawing Through and Through

As trees grow they become thicker by adding new cells beneath the bark which create a new outer ring of wood each year. These growth rings are known as the Annular Rings. The orientation of the Annular Rings, as seen on the End Grain of a board, has a significant influence on its characteristics (e.g. grain appearance, stability, wear resistance).

Live Sawing or sawing Through and Through is the most economical method of timber Conversion. With a horizontal Bandsaw successive cuts are taken down from the top down to the clamps then the log turned over to repeat.

The process produces three types of board:

Back Sawing, Sawing Around and Quarter Sawing are terms given other methods of conversion, some of which require the log frequently to be repositioned, but can be used to maximise the production of particular cuts of timber.

As timber dries out, the Annular Rings tend to shorten slightly and straighten out. There is little effect on the length of a board but shrinkage will occur across its width. Different cuts therefore react differently as the timber dries out.

The appearance of the Wood Grain is affected by the way the board is cut. Annular Rings at a steep angle to the face will appear as straight grain whereas if at a shallow angle, or Tangentially Cut, a wavy grain figure is produced. Also, just as with End Grain, the ends of the Annular Rings resist wear and so Quarter Sawn timber is not only the most stable but also the most hard wearing. Furthermore, Quarter Sawn timber, because it is radially cut, shows the radial Medullary Rays on the face of some timbers.

Plain Sawn timber is the most inexpensive and common type of cut. The growth rings are generally 300 or less to the face of the board. It is known as Tangentially Cut timber and is used extensively in the building industry (e.g. for joists etc.). The resulting wood displays a wavy pattern on the face of the board. Because of the curve of the growth rings this timber is most prone to Cupping.

Radially Cut timber produces the most stable and hard wearing timber but it is also the most expensive. Annual growth rings form an angle greater than 450 to the face of the board. Live Sawing produces only a limited amount of Quarter Sawn boards and Quarter Sawing can involve the log being repositioned many times to produce the radial cuts, which increases cost. It also results in more waste. Quarter Sawing may be used for timbers such a Oak for example, because cutting along its Medullary Rays will produce the much prized highly figured Oak.

Rift Sawn (shown shaded) is the cut which falls between Plain Sawn and true Quarter Sawn. Annual growth rings form an angle between 300 and 600 to the face of the board making it suitable for quality floor boards, for example, because it wears well and is reasonably stable. It is straight grained but, because it is not Radially Cut does not reveal any 'silver ribbon' grain features in timbers such as Oak.