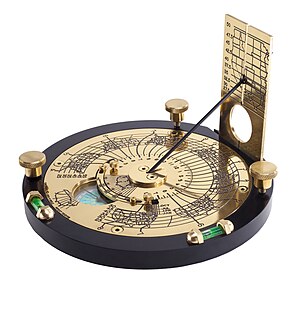 It is possible that we have used the movement of the sun since Neolithic times to mark changing seasons and Sundials of a type may have been invented in China or by the Ancient Egyptians and Babylonians. But it was the Ancient Greeks and Romans who appear to have developed them in the form we see today.

At their simplest, Sundials comprise a rod (known as the Gnomon) casting the sun's shadow onto a flat plate. They are commonly mounted either horizontally or vertically but other variations also exist (e.g. on curved plates).

Gnomons should point to the True North and be set at an angle such that it runs parallel to the Earth's axis. This is achieved by setting it to an angle to the horizontal which is equal to the Latitude of the mounting location (e.g. 51030' in London). Horizontal Dials should be set level and vertical Dials either placed on a South-facing wall or the Gnomon angled such that the shadow at noon is vertical.

Imagine a flat circular plate at the North Pole with a ‘stick’ aligned to the Earth's vertical axis passing through it. As the Earth rotates, the Sun will cast a shadow on the plate and, since the Earth makes a complete rotation every 24 hours, the shadow will move around the plate 150 for every hour (i.e. 360 degrees divided by 24).

The ‘stick’ which casts the shadow is known as the Gnomon and designs of Sundials placed on any position on the surface of the Earth should enable the Gnomon to remain parallel to the Earth's vertical axis.

Sundials where this can be achieved by having the Gnomon at right angles to the Dial plate are known as Equatorial Sundials since the Dial must be parallel to the Equator.

Horizontal Sundials are perhaps the most common but many are purchased with little understanding of how to make them accurate.

The Dial is positioned horizontal relative to its location on the Earth's surface, which means it must be Tangential to the curve of the Earth and set such that its Gnomon points to True North. A simple geometric analysis will reveal that if the Gnomon is to remain parallel to the Earth's vertical axis, it must be set at an angle to the horizontal Dial which is equal to the Latitude of its location.

It can be seen that Horizontal Sundials work best at higher Latitudes rather than near the Equator.

Activity: Draw a suitably sized Circle and its vertical and horizontal Diameters. From the Circle Centre draw an angle of, say, 600 for convenience and, where it intersects the Circle, draw a horizontal line to represent this line of Latitude. Draw a Tangent at the point of intersection between the line of Latitude and the Circle then show that a line draw also from this Point of Tangency but parallel to the vertical axis, must be at an angle to the Tangent equal to the Latitude.

Sundials can be designed such that the Dial is vertical and can be fixed to a wall. In this position, the Dial is Normal to the surface of the earth but the Gnomon must still be positioned such that it remains parallel to the Earth's vertical axis (i.e. set at an angle to the Dial of 900 less the Latitude).

Vertical Sundials are ideally positioned on to a South-facing wall. In this situation the Gnomon lies in a vertical plane at right angles to the Dial and the shadow cast at Noon is vertical. This must always be the case, so if the wall chosen is not South-facing the vertical plane containing the Gnomon must be angled round to ensure its shadow remains vertical at Noon.

Walls which are not directly South-facing are said to be Declined either East or West.

It can be seen that Vertical Sundials work well if nearer to the Equator than the North Pole.

Activity: Search the Internet for more information on how Sundials work (e.g. The British Sundial Society) and find out about other, less common, types of Sundial.