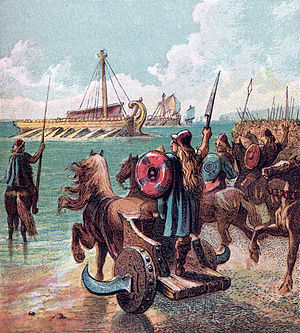 During their occupation, they continued to be subjected to attacks from tribes north of Hadrian's Wall. Roman Britain was also under regular attack from Angles and Saxons who came across the North Sea from Germany, Denmark and the Netherlands. After some 400 years of occupation, The Romans left Britain because they were recalled to Rome to defend their own homes against attacking Barbarians. The people of Britain were told that they no longer had a connection to Rome and that they should defend themselves against the invading Saxons.

The Romans completed many great civil works including roads, bridges, aqueducts, public baths and villas for the more wealthy. To achieve some of this, they invented and used a form of Concrete. Larger villas had a form of under-floor Central Heating and some buildings were decorated with colourful Mosaics on the walls and floors. Trade and industry flourished under Roman rule.