The Middle Ages or Medieval Period in England marks the time from when the Romans left Britain until the end of the Wars of the Roses in 1485 when the Tudor king Henry VII defeated the Plantagenet king Richard III at the Battle of Bosworth Field.

In AD410 the Romans left behind a well ordered society with a complex network of roads and settlements throughout England and, to a lesser extent, Wales. They had built Hadrian's Wall to defend against the raiding Picts and Gaels in the north, who later merged to become Scots. Over time, groups of immigrants from Germany, Denmark and The Netherlands settled in most of England as Anglo-Saxons until invading Vikings raided Lindisfarne in AD793 and occupied the north and east restricting Anglo-Saxons to Wessex in the south and west (meanwhile the Celts remained on the other side of Offa's Dyke in Wales and in Ireland and Scots in the north above Hadrian's Wall). 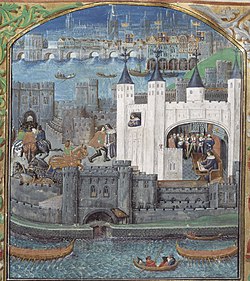 The Norman Conquest in AD1066 and as depicted by Bayeax Tapestry, brought to an end the rule of both the Vikings and the Anglo-Saxons. They retained the highly organised system of central and local government developed by the Anglo-Saxons and established control by building castles throughout England and Wales. They introduced Feudalism and commissioned the Doomsday Book to record land ownership. England became connected to Europe and broke its ties with Scandinavia. William also reorganised the church, bringing with him his own church leaders and building large cathedrals and monasteries.

Following the Wars of the Roses between the houses of York and Lancaster, King Henry Vll was crowned after defeating Richard lll to begin the rule of the Tudors from 1485 until 1603 which marks the end of the Middle Ages. During the reign of the Tudors the Church of England was established by Henry Vlll. He also established the Royal Navy. Later, during the reign of Queen Elizabeth 1st, Francis Drake defeated the Spanish Armada and Walter Raleigh sailed to set up colonies in America.

Topics involving aspects of the Middle Ages provide many opportunities for Design and Technology activities. Most are likely to involve making models and might include:

This category has the following 5 subcategories, out of 5 total.